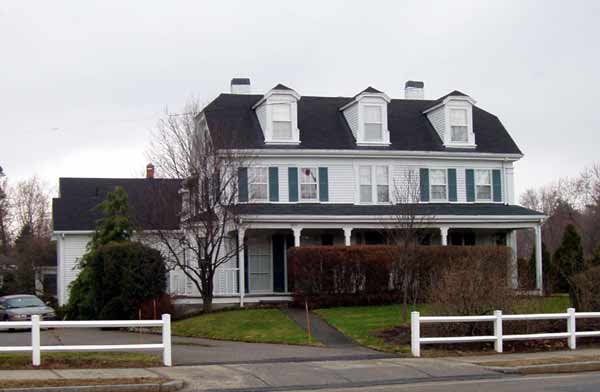 The Staples-Craft House is not a grand mansion, but it’s the oldest home in Waban and the only link to our agricultural past. It was listed on the National Register of Historic Places in 1986. On April 23, 2015 the Newton Historical Commission voted unanimously to approve this property as a Newton Landmark Preservation Site.

Let’s travel back in time to 1688. 68 years since the Mayflower landed in Plimouth, only a decade after the end of King Philip’s or Metacomet’s war. A war so vicious and traumatic, involving more than half of all New England towns, that his head could still be seen mounted on a pike at the entrance to Fort Plymouth. It would remain there for another ten years. Four years later the Salem Witch Trials begin and 12 years later Cambridge, or Cambridge Village, will be called New Towne, or Newton.

Deacon John Staples arrived in a land about 7 miles west of Boston that looked pretty much the same as the native Americans had seen it for hundreds of years. It was where Sachem Waban, a Massachusett native, hunted. While various areas to the north and west had the beginnings of villages, there were no structures anywhere on his vast 93 acres of land. Perhaps it was the perfect mix of trees, rich earth, the slight scent of the sea, the creek and the pond, the sun painting the hills and valleys… whatever his reasons, John selected just the right spot to build his home. If you look at the map below, the speck on the right below the hill – later Moffat Hill – is where he chose to build.

(The original map had North facing down so I reversed it to orient it the way of most modern maps. The horizontal road is Sherbourne – eventually renamed Beacon – forking to Woodward. No Chestnut, nor any other Waban roads exist.) 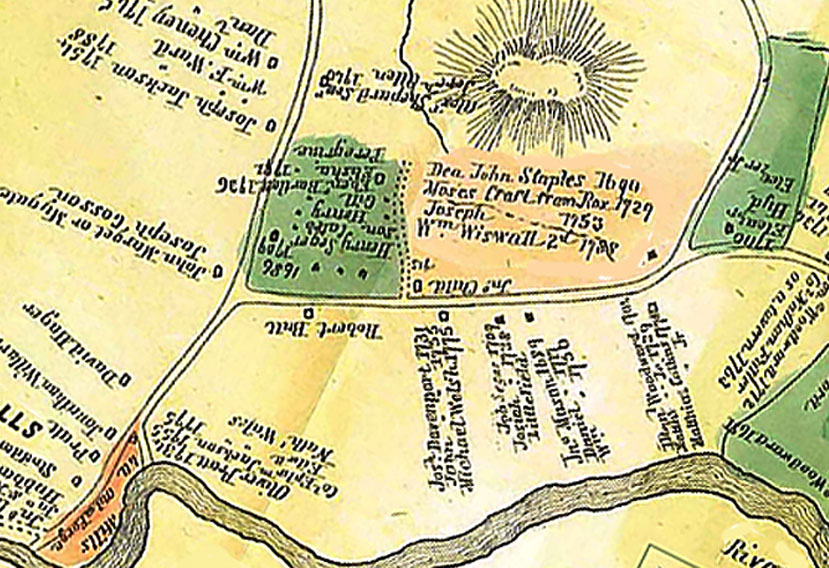 John was a weaver by trade but he ended up as the first public school teacher, the town clerk, a policeman, and a selectman or alderman, (now city councilor). In 1690, he married Mary Craft. In 1714, he helped do a survey and sited the new meeting house, found on the oldest map of Newton. 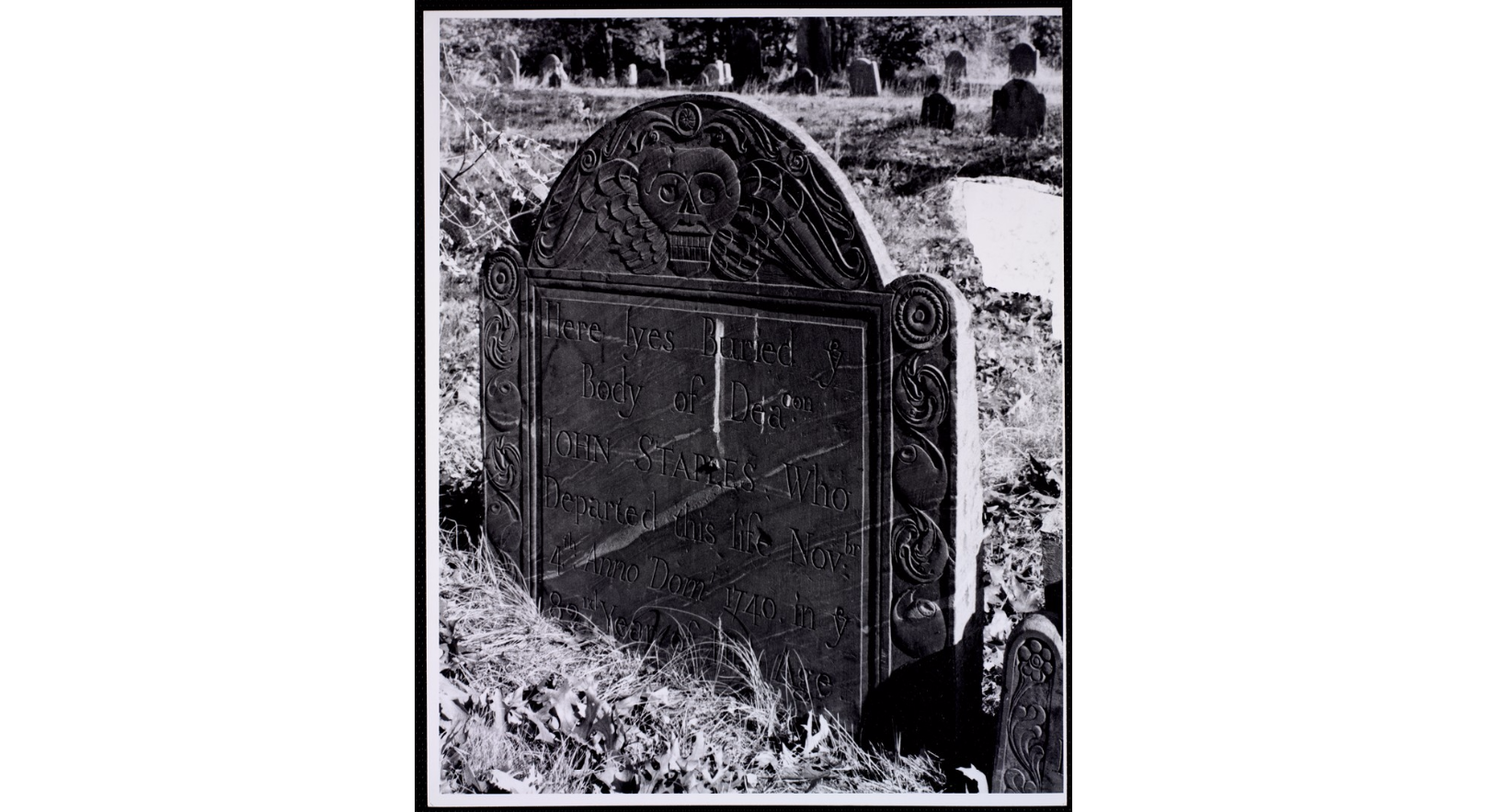 John and Mary had no children of their own but raised some of Mary’s relatives including Moses Craft, who would eventually take over the home. Keeping the foundation, which is three feet thick in places, and as often was the practice, he reused all the material and built a new house – the home that would still be there 300 years later.  Moses married Esther Woodward – don’t you love connecting the names with the streets – and had eight children. Moses sold the rear L shaped part of the house and 20 acres to his son Joseph, who would eventually take over the entire farm.

When Joseph died in 1821 – a year after Maine became a state – farmer William Wiswall purchased the property. It is believed that he and his wife Ruth added the Greek Revival updates to the house including the front porch. While Abraham Lincoln was accepting the nomination for a seat in the Senate in 1858 and delivering his “house divided” speech, a Boston merchant named David Kinmoth bought the property. Apparently, the property changed hands twice more before becoming the property of Waban’s first power couple: William and Mary Strong.

William Strong was the president of the Massachusetts Horticultural Society and he used the property as a nursery. William knew how to grow things. You have to be careful, choose what you plant, give it space, make sure it can sustain itself, tend to it, make sure nobody tramples it. Waban’s commercial building on Beacon was built by Strong. William Strong would also become the first President of the Waban Improvement Society in 1889. 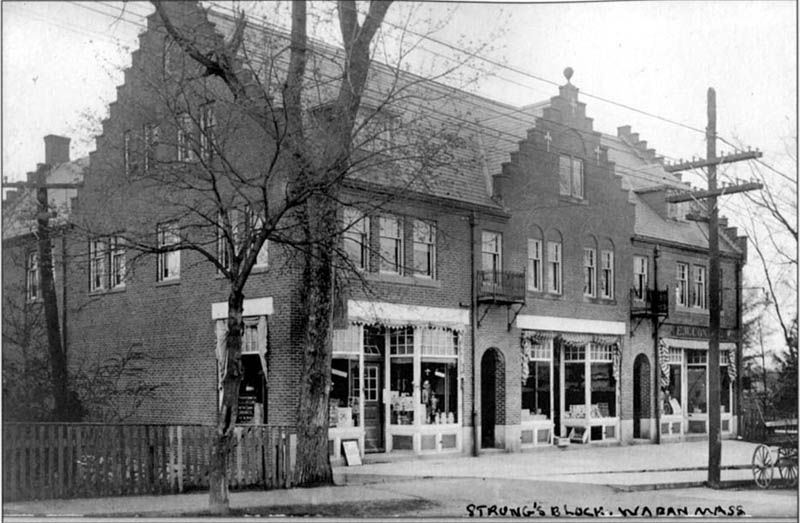 In the 1886 Atlas, the land is still one parcel but Strong eventually divided it into house lots. 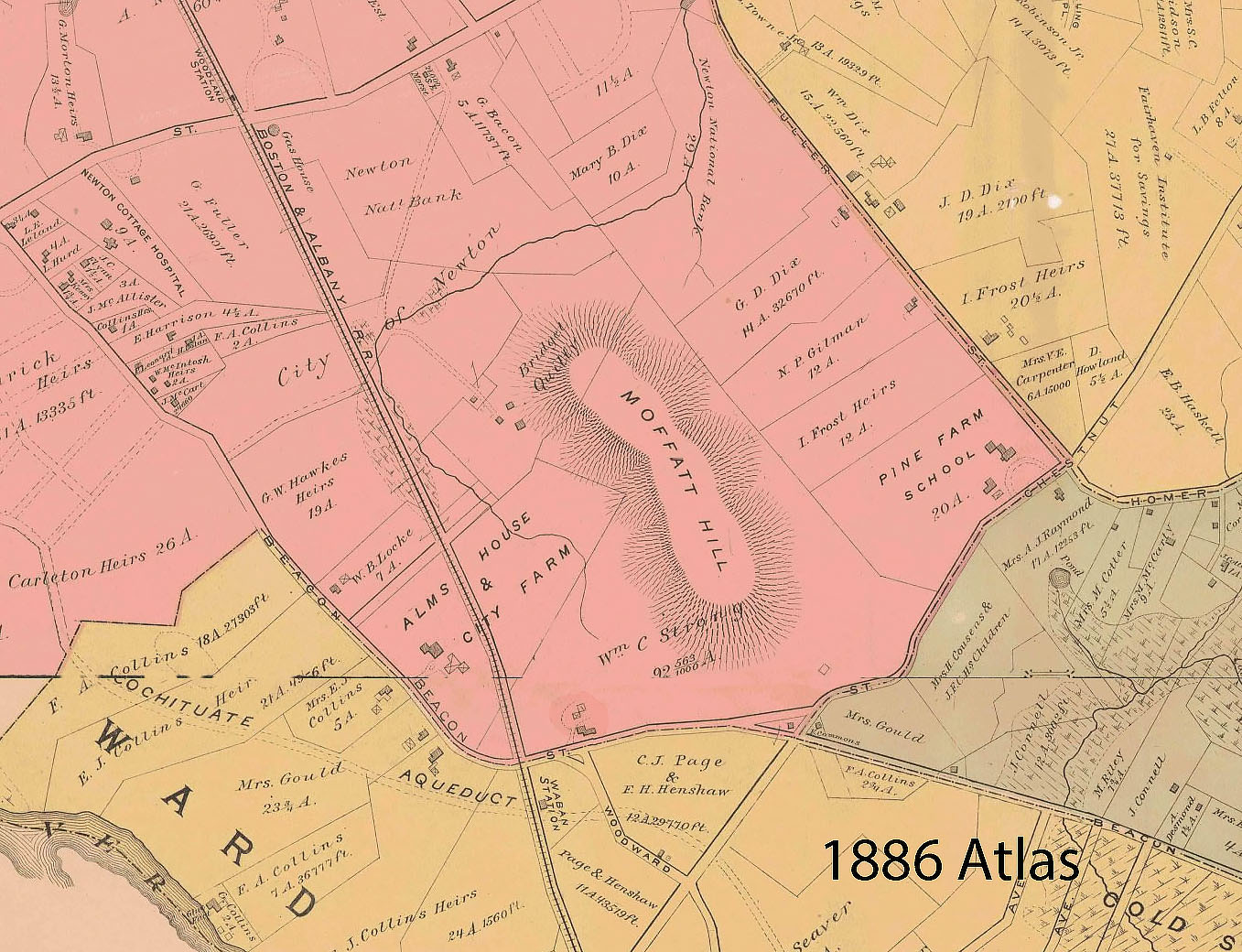 Looking at the 1907 Atlas, one can see many of the homes built were owned by members of the Strong family. 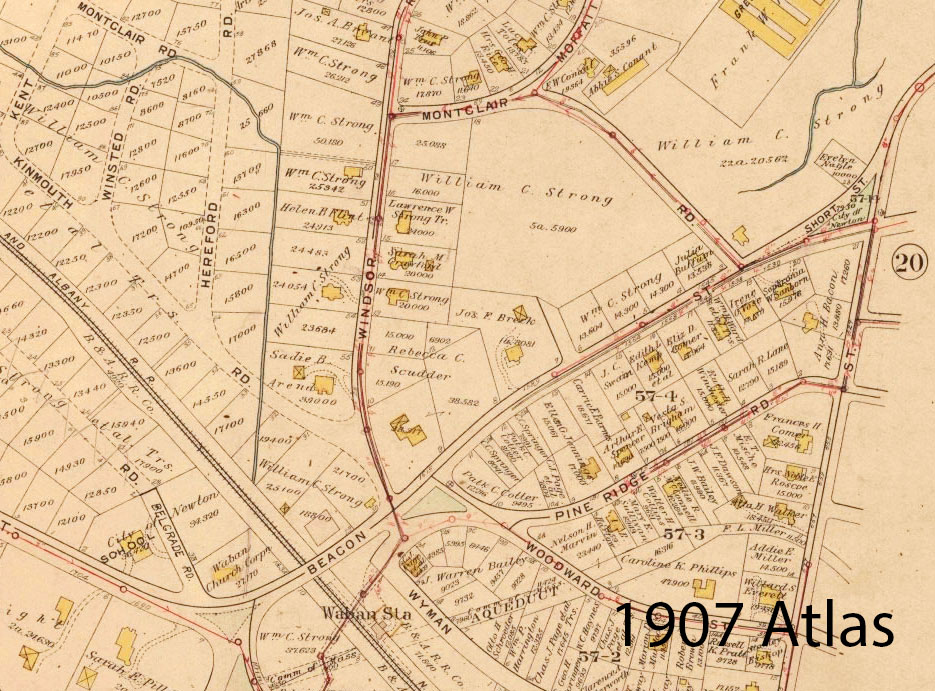 Below is a picture of the Farm prior to 1918 when the Windsor Club was built – it would be on the far left of the picture.

At the geographic heart of Waban, the village literally emanates from the farmhouse: roads were added to reach properties for new homes, churches were built nearby, and the new railroad would bring new inhabitants. Throughout all this change, the house, planted firmly in the rich ground John Staples thought was the perfect place to call home, would stand majestically, linking Waban to its agricultural and historical past. More families moved in over the years and became caretakers of the property. It was the rectory for the Parish of the Good Shepard by 1961 when it was sold to Donald and Virginia Nordbeck. Longtime Waban residents – the two attended Angier Elementary – they would see their daughter Caroline marry future Ward 6 Councilor Dick Blazar in the house. Eventually, charmed by a note left on their door by Sheldon Peck which said he loved the house and would be a trustworthy caretaker of Waban’s historic icon just as they had, they sold it to him in 1983. 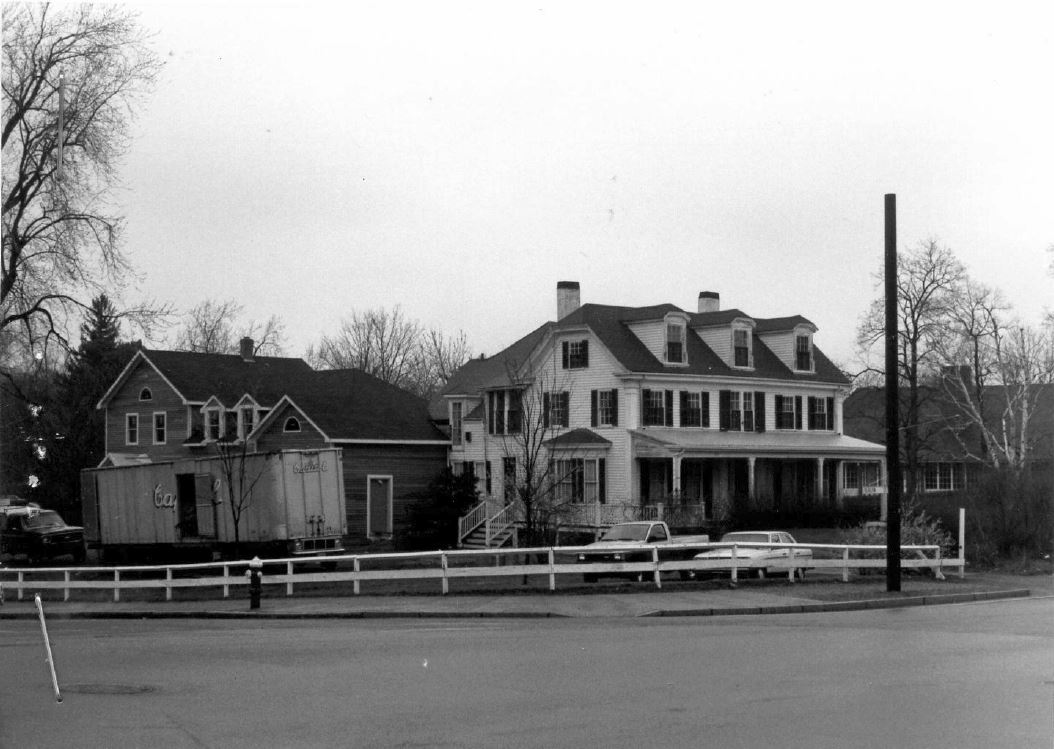 He converted the barns into his orthodontic practice. It was eventually sold to a developer who had plans to create a 24 unit apartment building but was voted down by the city and state historic commissions.

It is now owned by the Suzuki Music School and Pre-school. 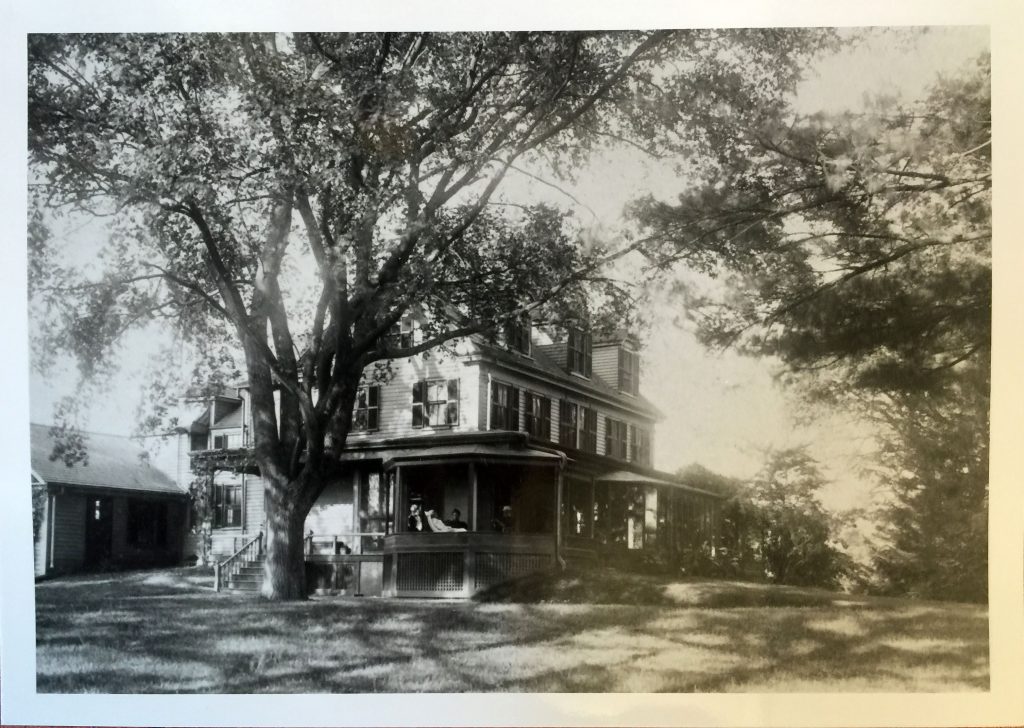